Robert: From a metaphysical point of view, why do nebulae form? And why are they so beautiful? On Earth they give us an explanation that is too materialistic for my taste. I remember that Swaruu 9 had a very intense experience while observing the nebula that surrounds Cyndriel.

Swaruu X (Athena): That is a whole topic, but some of it has already been said.
That is, that nebulae obey the same reasons for existence as any other thing or object that exists. From the simplest point of view, it is a cloud of varied substances, it depends on each one, because they are different, from gases to sand and loose gravel, which is attracted by the dynamics of equilibrium and gravity flow of a specific place.

For example, in the Pleiades the nebula is formed because the gravity of the stars together creates a point of attraction that is not only in the stars themselves but in points in the space between them that are like nodes or points of gravitational equilibrium between them. And those points in space also attract particles, which includes gases.

So, as an example, if you have two objects and one orbits the other, there will be an equilibrium point between them: Each O is a stellar object like a planet:

With the I as the equilibrium point closest to the object with the greatest mass.
That point, if it grows in gravitational mass, or is fed by the gravity flow in other words, will form a Gravity Well, but in the case of Pleiades that "well" is of weak force but attracts particles.

Why are they so beautiful? That is a matter of perspective and the tastes of the observer. But understanding that point of view, yes, they can be very beautiful. What shines is the reflection of the suns around it that reflects on the particles of the nebula, and the color will depend on the chemical composition of the nebula itself, mainly the gases present in it. This is explained with basic spectroscopy.

I should mention that some nebulae also produce to a lesser or greater degree their own light by the internal chemical processes of their own gases. It depends on each one.

Another terrestrial factor is that the vast majority of the photos of nebulae that you have on Earth are fake and are made by groups of paid artists who colorize images from telescopes like Hubble or create images from scratch with a view to perpetuate an agenda of control over humanity.

An example of this is the "Hand of God" nebula, which, although it started out as just a nebula in the form of a hand pareidolia in NASA, it has been exaggerated with image inking, to the extent that it looks like a hand, but that´s not the case. That is art at NASA in order to see how the human population reacts to the possibility of a "divine hand". But as such this nebula is not as it is painted on Earth.

As it is painted here, it does not exist: 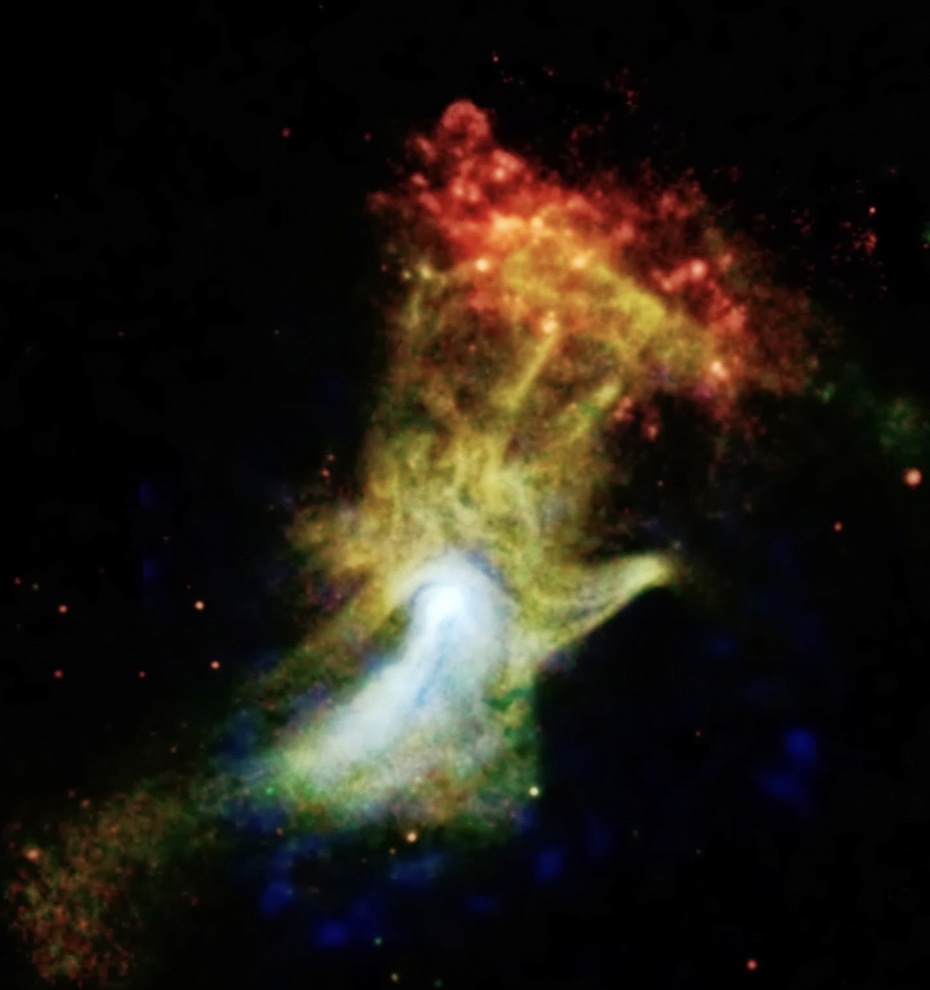 About the experience of Swaruupapriyananda, Swaruu 2, in a nebula, it was rather because she was close to Aldebaran, which in turn is immersed in a nebula that follows it.

Gosia: Question from the public: "Is the precession of equinoxes cycle (cca 26,000 years as perceived on Earth) real, and if yes — is it caused by the Sol 13 and Sirius relationship and how many of these cycles could be tracked?"

Swaruu X (Athena): That is a modern perception based on modern Earth Science and based on archaeological findings from several ancient civilizations.

Time is an issue here with that theory as the further back you go, the more difficult it is to calculate. Time is not a constant, that is understood even by Earth science with time dilation in space travel, and I mean simple space travel to low Earth Orbit. Time is a perception that is not external to who perceives itself to live in it when in fact they are it.

So 26,000 years is only a perception and calculation based on current collective time perception, and not reflective of how time was perceived "back then", so the time frame within anything that occurred ‘long ago’ will start to become progressively more and more difficult to calculate. Being that the only way would be using events as markers, in this case astronomical reading and calculations.

That takes me to the second part of my answer.
The procession of equinoxes, as with all other stellar or cosmic related events, does not depend on any one relationship between two or more specific objects. It depends on a complicated energetic dance between all stellar objects who influence each other in various degrees depending on countless factors, all related to energy, gravity and flux or flow of-gravity-energy in a common field that is the ether.

In this case Sirius does play an important or predominant role but so do other star systems, influences that are not all observable directly by Earth Science level of understanding because it includes complex energy-gravity flux dynamics in the ether, which Earth science does not even recognize let alone understand.

For all these reasons above, such cycles are not traceable and only belong to as-best-as-possible calculations, both by the ancients and by modern science. Having some truth to it all from a lower point of understanding which, in any case, can be seen as perfectly valid. Although from a more expanded point of view and science understanding it "does not hold any water."

Gosia: Question from the public: "Is there any tie between Alcyone and Sol 13 that is causing any cyclical behavior of the Sol 13 system?"

Swaruu X (Athena): As I explained above, it is a not only scenario, where in reality all star systems and planets are all interrelated, connected, and therefore influence each other all the time.

I've seen claims that assure Alcyone is influencing Earth and, again, yes, there is some truth to it, but from a more complete and expanded point of understanding what people on Earth calculate or understand about this is not considering the complex ‘dance’ and energy flow between all stellar objects, suns, which include them all, and not only Alcyone in this case or Sirius in the first case scenario.

Gosia: Question from the public: "What was the sequence and approximate passage of time between: the destruction of planet Tiamat, the construction of the main pyramid of Giza, the placement of the “Moon” ship, water from Tiamat reaching Earth, and the Earth axis shift (one or several)?"

Swaruu X (Athena): Having explained that time is not a constant, from a point of observational view of the sequence you ask the best way to explain the sequence would be:

2.) Construction of pyramids of Giza and most of the pyramids in other places, as well as many cities that are now gone or are in ruins all over the Earth and that are badly dated by human science.

3.) Construction of Atlantis at this period as well.

4.) Tiamat Wars with the subsequent destruction of the planet, and the devastation of Mars surface and ecosystems.

5.) Complete disarray of equilibrium of all the planetary dynamics of solar system 13 caused by the loss of mass of Tiamat, although mass in itself was progressively distributed in a different way as Tiamat became the asteroid belt.

6.) Cataclysms on Earth with devastating effects on biology and on civilizations caused by the abrupt change in planetary solar system energy dynamics.

7.) Wandering of Tiamat's mostly unfrozen water mass until it came into contact with Earth's and Venus's gravitational field and pull, falling to Earth and to Venus creating the great flood, and finishing with the destruction of civilizations there, and on Venus as well.

8.) Earth axis shift and polar reversal caused by Earth gaining a lot of mass, worsening the already ongoing solar system wide disequilibrium caused by the destruction of Tiamat, with the subsequent catastrophic cataclysm events worldwide that led to the extinction of thousands of animal and plant species. (Circa 12,000 years back)

9.) Placing of the "Moon" Federation battle damaged spherical biosphere ship in orbit in an attempt to stabilize Earth and bring it to an acceptable equilibrium.

10.) Placing of electromagnetic etheric fence, Van Allen Belts, as part of the efforts to energetically stabilize planet Earth lowering internal frequency and limiting its ability to connect to Source with it. This was to be a temporary measure only while the solar system returned or developed a new homeostasis.

Also said by others to serve as a holding area for regressive races so they cannot leave Earth. I personally don't agree with this but I mention it as it is expected to be mentioned at this point.
I do not agree because I understand that the placing in orbit of the biosphere ship that is called "moon" was necessary to stabilize Earth, and its orbit and its axis inclination and polar shift. Not only by presence of mass, but also by frequency imposition (Van Allen Belts).
And because I also understand that "bad" or "regressive" races held on Earth like captive by the Moon's effect as such, and as understood today on Earth, are a byproduct of a circular or of a vicious circle dynamic of thought, therefore of manifestation. That is people, mostly humans on Earth, will only manifest low frequency things creating egregors because of the artificially imposed lunar low frequency.

So I see the etherical fence surrounding Earth as a bi-product consequence of the moon and not the primary intention while placing the moon.
(More on the subject of the placement of the moon as a stabilizer for Earth will be given in another video)

11.) The subsequent development of newer postdiluvian and post cataclysmic civilizations such as Egypt and Mesopotamia, among others. But in a different order and time frame and not as accepted by Earth science.

Dates are also an issue due to the inexactness of human methods such as Carbon 14 that is basically useless and only used to make things fit into their wrong time frames.

Gosia: Question from the public: "Did Earth have a 360-day year before Tiamat’s destruction?"

Swaruu X (Athena): Negative. The time Earth took to revolve once around the sun was much longer, but hard to calculate exactly how much longer due to time slip problems and temporal perception, as Earth before Tiamat event was in a higher vibration existence, basically known as 5D for reference as I do not recognize any such numerical representations.

A note here: we interpret mankind's fall from the "Garden of Eden" as the fall from the higher vibration of existence, ("5D"), into a lower "3D" frequency of thought-awareness and existence.

It is very difficult to discuss timing pre 12,500 years ago, not only because time is a perception and not an independent thing, and not only because the datation process is problematic at best, but because we are dealing with two densities here, 5D Pre Tiamat and 3D Post Tiamat cataclysm adding to the problem.