Originally in English - Second half of 2021

Yazhi: The real secrets of the great pyramids are embedded in their structure, in their perfect mathematics showing off everywhere, the relationship between each one of its components, making it impossible to be built with primitive technology.

Many intelligent scholars today insist you cannot design the pyramids without an advanced supercomputer. That's the message there the pyramids are telling you all in your faces. They were built by highly advanced interstellar civilizations (plural) in cooperation. The level of mathematical knowledge materialized there is simply astounding. The pyramids are a geometrical structure that speaks pure mathematics in a universal interpretation using constants and primes.

Its secrets are withing its dimensions, between the relationship of its components and their hidden meaning when compared or confronted with stellar navigation. So it's very hard to see anything with the naked eye just standing in front of them. Other than their pure magnificence! Proof of non-human intervention, proof of civilizations far more advanced than yours has existed on the face or the Earth long ago. Civilizations that interacted constantly with non-humans.

The pyramids are built in such a mathematical perfect way that it is impossible to even think by logic that the builders did not know the secrets to electricity among so many others like anti-gravity and sound frequency anti-gravitics.

However, from the outside there are some underground openings along the base, do not confuse with the holes blasted with dynamite by irresponsible British explorers in the 19th century.

Look at the base of the pyramid. See if you can find some of the smooth white granite blocks that once covered its sides entirely, giving it originally an impressive polished white appearance that reflected the sun, giving it an even more impressive glow at dusk or dawn. As if this were not enough, its cap was pure quartz crystal, covered in gold sheet.

Another thing you can look for is the red granite base all around the pyramids especially Kufru. This is an isolation layer so the electric current and electromagnetic force accumulated in the pyramid do not filter down looking for an earth connection, so all its energy flows through its systems in the interior. You will see the granite is different. It's red granite or also called rose granite.

Another interesting thing you might be able to spot is the quartz crystals and the iron fillings embedded in each one and all the stones with which its made of. They may be easier to spot at dawn or dusk or whenever you can get sunlight to reflect off its surface. They do glow. These help in an enormous way to expand the piezo electric generation properties of the pyramid itself besides its electric collector properties, being an essential part of them.

If you can get inside, you most probably will enter through a 19th century blasted passageway as I understand the main entrance is now closed, I wonder why. Inside in the King's Chamber, but especially in the Queen's Chamber, you may be able to find holes where electric copper collectors once rested or where installed.

I seriously doubt you can find any copper itself as by now it has been methodically removed by countless people, especially those who are interested in preserving the idiotic idea that the pyramids were tombs. Especially those in power that want to preserve the status quo, false history for population control purposes.

The pyramids were many things, mostly energy generators, Zero Point, and more. Giving off wireless electricity to all who needed it, not only in its surroundings, but if they had the proper receiver gadget, they could tap to this wireless energy grid from all around the world.

They were also consciousness enhancers, for portal travel using mind only, using its electromagnetic potentializers qualities inherent in its design. Which was quite common back then as that knowledge was for all and not seen as dubious as it is today by modern civilization.

And last but not least, they are a marker. They state that advanced civilizations were there, built it, and are waiting for people who are smart enough to see this. 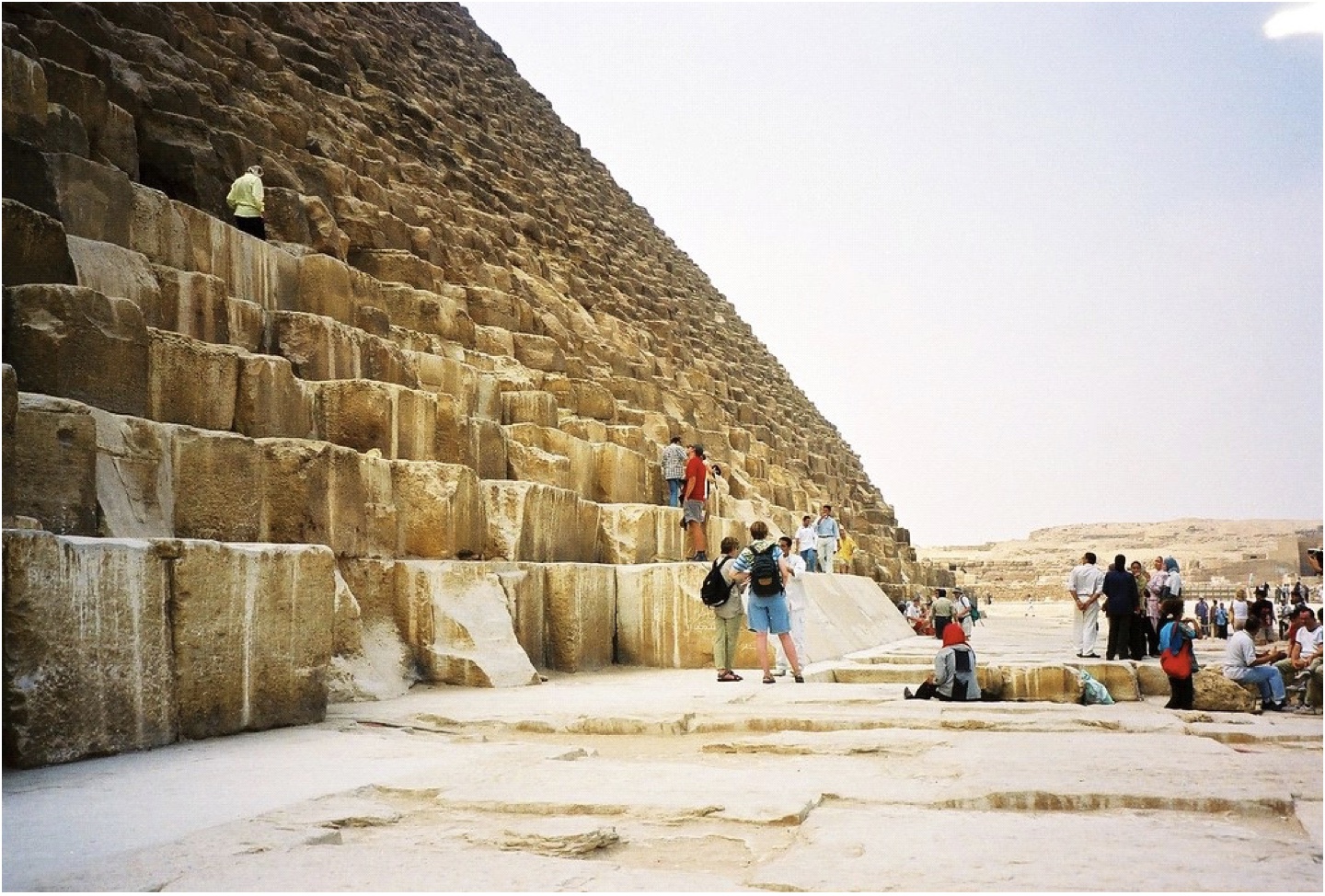 Right next to the guy in blue shorts and a black backpack in the middle of the image you can see the remains of the white smooth stone granite that once covered the entire pyramid.

Question from the audience: You once talked about levitation with anti-gravity devices. You said stones were "then pulled to their locations with the use of a crane that was installed in the King’s Chamber. The pullies, and where the system was installed, is still there. The levitation was only to remove most of its weight. It was built in a spiral movement.”

Would these attached images be accurate to show the spiral pulley system? The corners show an ancient pulley system, but the question is, where is the crane? It’s in the King’s Chamber, but how? In the transparent image below, would we place a huge crane in the center and have it spin around as the pyramid builds up in a spiral formation? And does the ancient crane look like what I have below?

Swaruu X (Athena): There were minor cranes outside, and those were movable, but main crane was in the Grand Gallery as recent archaeological discoveries turn out to be correct. That main crane was designed to pull up each individual stone on a ramp with a series of pulleys, and once the stone was at the level of the King's Chamber it was then moved along the spiraling ramp around the edge of the pyramid. Vestiges of that ramp are still to be found around and on the corners as your image suggests.

Grand Gallery, the notches where the crane cradle and system were anchored can still be seen in this photograph, at the lower edges of the floor where it meets the walls (rectangular holes at regular intervals).

In short, the stone was placed on a cradle or a sled that was pulled towards the King's Chamber with a set of pulleys, then moved along the spiral ramp way on the exterior edges of the pyramid.

The possibility of a central crane still stands, but the best of our information suggests it was never used in the construction of the largest pyramids, perhaps in other buildings or smaller ones, or to finish the Great Pyramids, moving the highly polished exterior granite or white lime stones and not the main building blocks as they would have been too heavy for straight up crane work.

Reminding here the use of anti-gravity equipment to semi levitate the stones or to remove some of their dead weight, but not all. And reminding the heavy use of liquid rock to mold some of the stones in place and as mortar to stick them together as well. This technology is no longer in existence on Earth, but it is in many other planets and civilizations like Taygeta where houses are mostly built by pouring liquid rock into a mold and then removing it when the rock is cured enough.


CONVERSATION WITH ANEEKA - end of 2021
Originally in Spanish

Robert: The head of the Sphinx of Giza is the original? They say it is not because it is disproportionate to the body and it seems to be made with another material. And now they say that it is the face of a man. So it cannot be "virgo".

Anéeka: Yes, it is the original, according to our data it never had the head of a jackal or a lion as many scholars allege.

Robert: And why is it so disproportionate? To mark a difference between Virgo and Leo?

Anéeka: I don't see the point because astrology and the zodiacal signs are thousands of years old since before Egypt, tens of thousands of linear Earth years.

Robert: So it wasn't necessarily done by the Egyptians you mean? 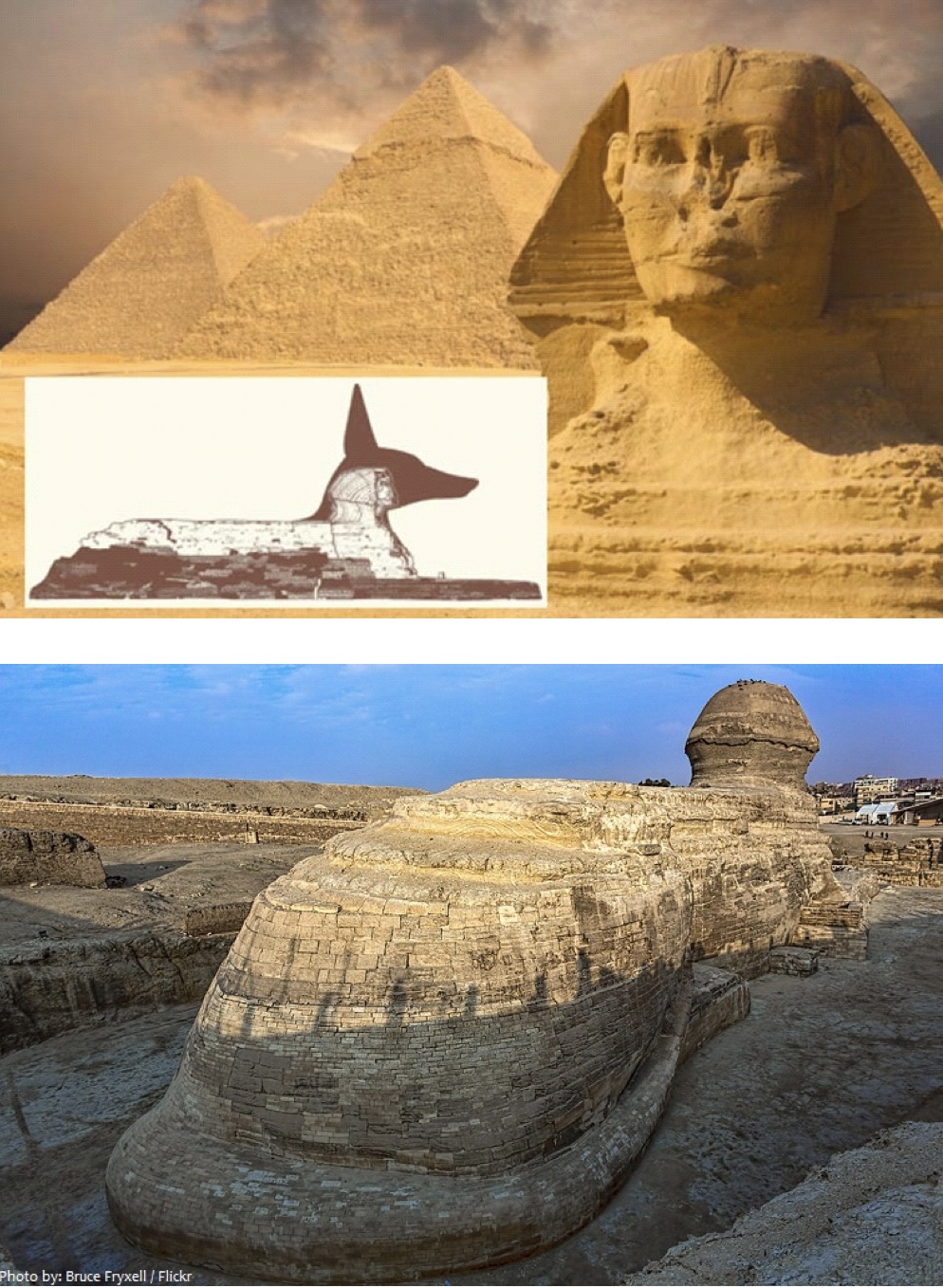 It is a building, not a realistic statue, but it being disproportionate is also subject to discussion. It wasn't necessarily perfect from the start. It has to be lion because the lion is the symbol of Egypt since forever.

It is represented by two lions, it is Lower Egypt and Upper Egypt, two united kingdoms. It is facing East because it represents the beginning of the Egyptian year that starts in Virgo, that's why the sun is born of a Virgin and the Egyptian year ends in Leo, that's why it has the back of a Lion and the front of a woman (Virgo). The "scholars" come up with stories without knowing the pre-dynastic Egyptian culture. And just trying to fit the Sphinx into the Egyptian values of middle kingdom rank around 5000ac where it is said to have been built officially, being much older, which can be proven by looking at the water damage marks the Sphinx has.

Robert: They say the head is of the Pharaoh or the one who made the Great Pyramid.

And there were two Sphinxes side by side. Lower Egypt and Upper Egypt represented there. It's always two. Two lions. The feet symbolize that it flies. That he has firm hold on Egypt. 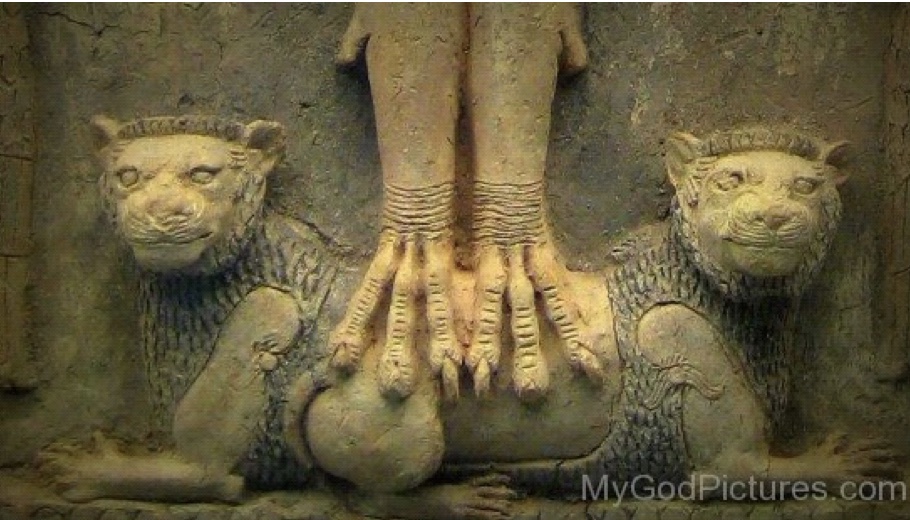 Robert: And Anéeka, the Egyptians also built underground? Not only on the surface? I mean temples underground?

Anéeka: Yes, definitely yes. Most of the Egyptian constructions are underground and they hide that from the inhabitants of the Earth.

Robert: A question from a follower: "Do you know what relation the Egyptian Sphinx has with the Urmah race?" If there is any relation, of course.

Swaruu: No particular relation, only that they are a Federation. The Lion in Egypt, as in many other places, represents the sun, because of the mane. The Sphinx is an astrological representation of the seasons, the year that begins in Virgo, the head, and ends in Leo, the body, that's all.