Canadian Truck Convoy - Warning from Athena Swaruu - Is there an Agenda?

Canadian Truck Convoy - Warning from Athena Swaruu - Is there an Agenda? 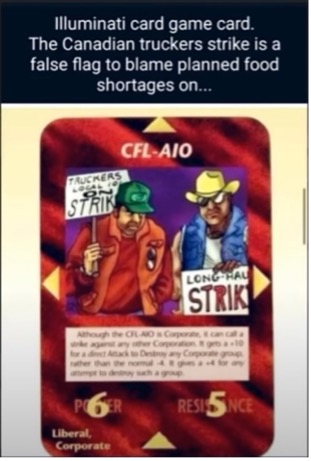 Swaruu X (Athena): Controlled dissidence detected. The convoy was organized by the CIA. In what seems to be something that was already planned since the beginning of the plandemic. Yázhi detected that it is even in the Illuminati cards.

The theory, and not just from us, is that it may be to create a scenario of food and supply shortages in the U.S. and Canada and the blame to be placed on the truckers. And on the fact that they protested.

Gosia: But what if it brings positive results?

Swaruu X (Athena): On the surface, yes, and that's what we have to keep in mind and watch closely. However, there are elements that are extremely suspicious, such as the fact that they are being allowed to organize to this degree. So the focus of the protests is there. So they no longer do protests elsewhere or do not engage in any other kind of resistance because it is already there. Same formula used with Trump, with what they said about doing nothing and trusting the plan.

And this gives people a breathing space and a hope of change for the better, and that's exactly what they want because what's coming now is a supply shortage or something similar and the protesters will be blamed and not the governments. And people will not be able to see it.

This is part of how they proceed, cause problem-reaction-solution... followed by very strong restrictions to then give them periods of hope that will come in various forms, not just "relaxation" of restrictions. To then cause the found freedom to create a new problem which will need more government regulations (like with truckers). That's what I see.

I know it can only be viewed as speculation. But it is studied speculation. Now to sit back and observe. But let the record show that we said it or I said it. It may not be? Yes, but the fact that they let them organize at that level is very significant.

Gosia: You said that it has been seen that it was organized by the CIA. Is there any precise data that confirms that? Where is this coming from?

Swaruu X (Athena): From us, because we know that all these kinds of controlled dissident movements are specifically organized by the CIA. That's what it's for.

We don't need precise data. That's what the CIA does, it's always them. Even if it's the Mossad, MI6 or whatever intelligence, everything is coordinated by the CIA because all those organizations are or are made to protect the interests of the Illuminati-Cabal. They are all just arms of the same CIA, hence the letter C of CIA for Central Intelligence Agency. It does not mean only of the United States, but Worldwide, as it is with the Vatican.

I only report what we know. For what it is worth and useful. I cannot know what motivations there would be exactly. The truth is that, data or not, it is still all speculation, but having appeared in the Illuminati letters it is very significant, as in "it was in the plan". Those cards do not come from a visionary like Nostradamus. It is very easy to predict the future, what will happen, when you are the one causing it.

Gosia: When were these cards designed?

Swaruu X (Athena): They became popular in the 90s.

Gosia: Why are they called Illuminati?

Swaruu X (Athena): Because it is said that they had them made to tell the people what they will do with them.

Gosia: Isn't it possible that they just organized so many people that the government can't do anything about it? We always say that there are more good people, and few controllers.

Swaruu X (Athena): It is possible and we hope so. But the fact that they are the truck drivers is very suspicious, because they are in the Illuminati cards and because the damage they can cause in the perception of the public is a lot. Damage as in that if they organize in a big way, they will only bring more calamities to the population, scarcity of resources. This point is key, truckers - supplies. With that it is suspicious, very suspicious.